8 years, 5 months ago by Namacarya das

In the purport SP writes:
The Personality of Godhead may not be present before one's eyes, but if one is sincere in wanting such guidance the Lord will send a bona fide person who can guide one properly back home, back to Godhead ....
...The bona fide representative of God is as good as God Himself. Or, in other words, the loving representative of the Lord is more kind and more easy to approach. A sinful soul cannot approach the Lord directly, but such a sinful man can very easily approach a pure devotee of the Lord. And if one agrees to put himself under the guidance of such a devotee of the Lord, he can also understand the science of God and can also become like the transcendental pure devotee of the Lord and thus get his liberation back to Godhead, back home for eternal happiness.

ASA - HpS - AGTSP!!!   paoho.  Big topic, no?    At the end of NOI Text 5, Srila Prabhupada says that Srila Rupa Goswami advises the devotee to be intelligent enough to distinguish between the kanistha, madhyama....   Then we engage in the Dadati - Pratighrnati in terms of the devotees advancement. So the bona fied representative can be kanistha, madhyama or uttama. Lord Caitanya and Srila Prabhupada from the highest position are engaging new devotees and advancing devotees as siksa gurus. They are his bona fide representatives, they give us good advice.  They show us the maha-mantra from the little card while we are with the Hari-nama party in the street. They show us how to cook vegetarian food and offer it to Krsna.

They direct us to an uttama adhikary, the Acharya, Prabhupada.

Yet, they may have accidental falldowns because they are on the 3rd and 2nd class platform.  How that affects our relationship with our Acharya, Srila Prabhupada, is, of course, different depending on the details of the situation, but basically we should know that Srila Prabhupada and our service to him is still there in its broad clear outlines and then we an work on improving the details, adjusting to the ever changing situation of relating to his servants in their various stages.

Of course, fall down because of envy, offenses, can happen at the paramahamsa or bhava bhakti stage, like Bharata Maharaja or NOI 6 "As soon as anyone becomes envious, he falls from the platform of paramahamsa".

Of course, here we see the subtle distinction of becoming envious being pushed on you by the environment, accidental falldowns, and the conscious choice to be envious, falldown from Bhava or even Prema or even Vaikuntha as we understand by misuse of our little independence.

If anyone else asks the question we will ask you to answer it!

8 years, 5 months ago by b.Natalia Molina

I am doing my final exams this week. My last presentation is on Monday. I make Krsna Concious projects on some courses that were free to chose the subject. I am working on the last things of a little magazine illustrated by me, and a flyer about chanting. It may be useful for devotees. For the magazine I have to do 20 copies to be distributed as a part of the project.

On 12th I finish so I can join the marathon! Distribution is going very well, my friends Yugala and Maria are doing a great work!

My sadhana is steal better, waking up early, and chanting my rounds as good a posible, doing my studies, my Tulsi care, my garden. But still I feel my mind is not seriously focused, and I am sad, and trying to understand the situation.

We are reading (with my brother) the BG every afternoon half an hour, and then Krsna book!

All glories to your service!

HpS-ASA - Wow!   AGTSP   paoho   Very nice.        Yes, always pushing to get more focused.  We also struggle with this.  Your final examinations seem nice also.   Our respects to your father, mother, brother. We tried to get some stuff from Manipur for everyone!
Christmas Marathon.   Everyone is thinking about Jesus.  We are Wise men (and women) coming from the East with gifts for baby Jesus!

8 years, 5 months ago by b.Natalia Molina

This time I have to excuse myself, because I have my final exams I was not able to go to the two last Sattva meetings, so I am not informed about the last activities. I left a message to get information on our Facebook group today, but I didn't receive answer yet. I have to apologize, I will try to have a good report por tomorow! It is ok? It will be an exception.

8 years, 5 months ago by danielfrozero


All glories to Srila Prabhupada!

My most humble obeisances to you


How are you you Maharaja?
ASA - AGTSP    paoho.   We are O.K.    Gotta get back to our rounds.  Took time off for the God Blog because internet is O.K. early in Kolkatta!!


Here we are in Krsna consciousness, trying to make progress
I'm fine, with little time and much to do.
Still working at the restaurant, LuckilyI am used tochange
since many years I worked in the previous employment.
I continue on my mission father, and I see my children grow up .. every day, offering love and example, and try to raise them as best as possible.
I'm in a time of change in my life, and I have organized, and also internally. Sorry ... still do not ask questions about the Bhagavat Gita and Bhagavatam to you, I'm not very intelligent but I'm in a constant search and read on a daily. Read to you and listen to their classes, are very important to me
I follow the principles.
Now my alarm clock ... this at 6 AM, I hope the ring next month at 5 PM. J

ASA - Huh?    We don't know?   Maybe you are doing the first 16 with an offensive attitude: "Gotta chant these rounds our I'll go to hell".

The Ratha Yatra was done in Buenos Aires, we were playing music.. with Narayana das Parah, and other devotees. It was something unusual ... something like a Kirtan Rock Fest .. but hey .. we will improve them, ahaha
I have attached some pictures... 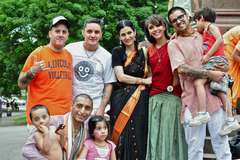 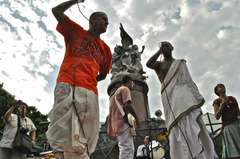 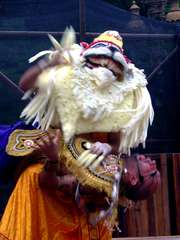 Getting near to path of Bhakty Yoga

thaks for give'us to much

all yor activities are example of how may one set up in bhakty.

I'm try to do it, the lesson about to like the devotees is so hard to me. many distractors do me slow walking.

Wake up early. chanting with care and attention is gruelling. but just for try may be on a time I can get the blessing of do it good. just if you like, for me is so hard follow, untill I get lucky to have affection and to acknowledge all the favors that many devotees near to me are givin it to me.

In GDL Nitai Nimai made the 35th RATHA YATRA. we join to New nilacala mandir devotees to bring Lord Jagannath and Lord Balabhadra, and Srimati Subhadra Devi, back to Vrindavan. but I found many disabilitys on team service. the unity in diversity of characters,  I need dairat, to undestendig how the lord is diverse like his energies (tathasta and more).

we are working on the program of cultivation and contacting new sadhakas. ISKCON ministry of congregation programs help us but it's a extensive job. and time live is going out and the slowness don't leave me.

I hope be useful. please keep me under your lotus feet!

Yet, is wonderful letter.     Even when Krsna was personally present in Vrndavana there were demons, what to speak of ISKCON GDL!      Yet, we can see how they all have a nice purpose as we get on the inside of Krsna's manifest lila!

8 years, 5 months ago by Bhakta Italo