1 year, 8 months ago by arina in Other

Haribol Hanumatpresaka Swami! PAMHO! AGTSP! Yes, I saw some videos from Nios Image, but you asked me i I wanted to write something for the magazine Solaris. ¿? Write where ? My teacher has answered the message, he says that the topic inspires and interests him a lot, but he does not think he can contribute much. He says we'll talk about it in September. I have asked him to warn me before September. He lives in Valencia, but maybe he can travel to Madrid, Barcelona or Guadalajara. I will inform you when I know if he wants to participate or not. Here in Nueva Vrajamandala, I'm going to do the disciples' course and the Bhakti Yoga course. thanks you! Arina.

HpS - Hare Krsna! AGTSP!! This letter was 4-months ago. We were not able to answer almost any letters for months while traveling. Now we seem to be getting our feet on the ground here again in Tennessee, but then, end of January we will travel again.

Nice thing is that we got to meet you in bodily existence while we were in Spain.

I have never met anyone more intelligent or more compassionate or more humble than Srila Prabhupada. I hope you can also get to know him very well. If you know a superior person, or have a superior idea, he is the first to be eager to meet them or understand. 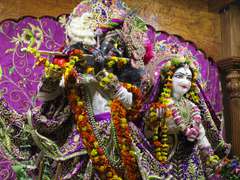