1 year, 4 months ago by jagatbd in Personal Sadhana Reports

How are you doing?

HpS - AgtSP!! Paoho... Honestly speaking, I think we are doing just like you! You are nice devotee struggling to become purified, wake up, and so are we. We have different positions. Have been missing your association for some time. Always think of you we do Puja to Prahlada deity.

I have listened to some of your classes, but not all because my mobile can´t have all the apps, due to the full capacity.

I wanted to tell you that the next Friday June 4th I will be having my bachelor´s exam on Pedagogy with the topic "Is there a Pedagogical theory?", so I have been busy. I hadn´t written you because I also wanted to rest about so many problems in the temple and confusions and divisions too. So I prefer to be away from devotees for sometime.

HpS - We wrote about that in the letter to Gandharva Das today: https://monkeywarrior.com/detail/12406/.

We must be 100% dedicated to helping Srila Prabhupada's institution, ISKCON, but of course, that requires different relations. Krpa acharya stayed with Durodhana and the Kurus, like Bhisma and Drona, to the end, but Krsna did not reject him. Rather he made him the Acharya for Yuddhisthira after the battle. On the other hand, Vidura left and went on pilgrimage. Find our best position to:

I also wanted to tell you, if you remember when I gave you Hanuman deity, it was me who gave you Hanuman on your Vyasa Puja festival in 2003, my mother in law at that time worked in the boutique at Vrinda temple, so she had two Hanumans, so I asked her to sell me one for you because I thought that would be a nice present,

she had two hanumans and I chose the nicer one for you, I still keep the other, I attached photos here.

At the bottom Hanuman had a tag that said made in Nepal, but it was me who gave it to you, this is something personal, you don´t need to say he is Mexican, or mention my name if you don´t feel like doing so.

I hope you are fine, also I told [. . . an older godbrother] that I was going to be away from devotees because I felt offended and angry for the nasty homophobic comments he made against my daughter Subhadra with no reason. So I never talk to him again.

So I hope this letter finds you well, I sent a happy birthday message on Whatsapp on January 12th this year, but you didn´t reply. I guess you have rejected me as your disciple.

. Of course, I don't "reject you as a disciple". You can be upset quite naturally if other devotees say stupid things, but we don't even reject a blade of grass. We adjust our relations according to our development and then see how we can help people act and understand things properly, no?

We got like 15,000,115 Whatsapp messages. On our "birthday". We said that we just could not handle all of them. Maybe everyone send a greeting on THEIR birthday!

Mercury is the closest planet to the Sun, but all the planets have a individual relation with the Sun, no?

Tomorrow is your test! Hope you take Krsna's association.

HpS - You equally useless servant, HpS, also trying to be member of this Sankirtan movement.

Attach a favorite photo of Srila Prabhupada leaving the Vyasa asana, and putting both feet on the groud for Sankirtan! 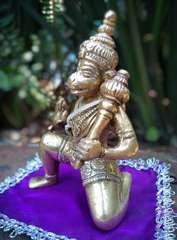 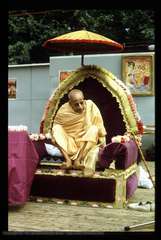