8 months, 1 week ago by Namacarya das in Personal Sadhana Reports

Yesterday this school year came to the end. If you remember, I started a job at the elementary school last September. It went fast, it had difficult days, got some observations and distributed prasadam to some professors (they all loved it). Mother of a child I was assisting send me a message with words of gratitude.

Summer season with tourists started a few weeks ago.

Some japa rounds were not chanted and are duly noted down.

I worked a lot from last September and for that reason I did not studied sastra so much as previous years, but managed to read few books by Srila Bhaktivonoda Thakura and the two books by Hrdayananda das Goswami.

It could look that I lost some taste for direct Krsna bhajana / nava vidha bhakti. If I had any ... However, many days I yearned to open Srimad Bhagavatam or do japa. And when I did it, there is/was satisfaction arising inside myself.

Went to Ljubljana (Slovenia) for a day of kirtana. And again and again, sitting down (or dancing) while performing Krsna sankirtana was nice. Also went to Ratha yatra in one town in Croatia. When Candramauli Swami saw me, he asked if I want to lead kirtana. I gratefully accepted, but said only if some organizers asked me, and that he does not tell them to do it. After a while, I got the microphone.

Krsna bhakti is deep, broad and at times cryptic process.

Depends on the perspective

and on the heartbeat

HpS - AGTSP . So very nice to hear from you after so much time. Do you have daily SB in the morning???? Really, really, really hope the very, very best for you. You can follow the example of Bhakti-vinode Thakura in your Ashrama, no? 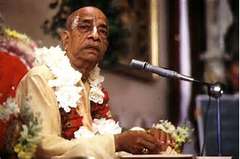