1 year, 1 month ago by hps in Sankirtana / Temple Activity Reports

After a super, all ghee lunch prasadam tali, in Govinda's restaurant, I joined the Russian Hari Nama Party.

Last week I had been having difficulty on Sankirtan. Trying to stop tourists and sell them Prabhupada's books were hard coconuts to crack.

During the Hari Nama sankirtan the crowd went wild and were dancing and chanting profusely. Then I went out with Prabhupada's books and people were snapping them up. "So this is how its done," I thought. The Russki Hare Krishna's are a small group, but being white as the snows of Moscow they are very entertaining to the Bangalas.

In the evening Srila Jayapataka Swami gives a Farshan lecture on the roof of the lotus building. These are always ecstatic. He tells many stories of Lord Nityananda, how Nitai wants to give His mercy but we have to want it. We have to stop thinking that material happiness is the goal of life.

Lord Nityananda says "Just chant the name of Gauranga and dance without anxiety. There's nothing equal to the happiness that I am giving. That happiness is pure, eternal ecstasy, beyond all illusion!"

Also was Madhavendra Puri's appearance day on top of everything else. Jayapataka Maharaj told us how Madhevendra Puri appeared in northeast Bangladesh, and had mahabhava emotions like those of Srimati Radharani. He went on to explain Madhavendra Puri's contribution as incalculable in our param para going back to Madhavacharya.

That liberation attained by Brahman realization at other holy places is obtained simply by bathing in the Ganges river at Mayapur. So every day I go to Prabhupada Ghata nad take a dip in its soothing waters. I have swam in rivers, lakes, oceans and pools all over the world, but nothing compares with the wonderful effect of diving into the ganga.

To get there I take the local bus. At 7 rupees ($.18 cents) it is the best deal in town. It only has one real stop, "ISKCON Mandir." All other stops consist of the ticket taker banging on the side of the bus. One bang to stop, two to go.

Mayapur Dhama is full of knowledge and bliss and is completely spiritual. One who sees only the activities of material nature in Mayapur Dhama is a conditioned soul under the influence of ignorance and illusion. Those people who always reside in Mayapur Gauda mandala are the most fortunate in the world.

I passed some men who were paving the road from ghrastra village to the goshall. I told them that they were doing a good job, "apnara balo kaj koren" and they exclaimed that it was because of the mercy of Bhagavan Sri Krishna as they pointed to the sky.

On this domingo fiesta day of 19 May 2019, I hope this meets you well. Mishra Bhagavan Dasa

HpS - Hare Krsna! Thank you Guru Ji! Please bless us with your brave, Sankirtan, spirit. How is your family? Starting to get hot. Are you moving? 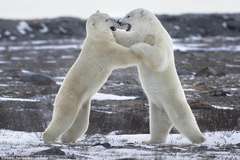